Two Kids, A Dog, and a Teacher’s Salary 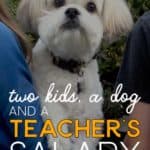 It was October, in the year 1999, and I had my first trimester of pregnancy under my belt. I had worked three part time jobs, while the hubby was in school, and now he was making the big bucks, as a teacher. I no longer HAD to work and put in my notice, at Costco, to become a stay at home mom! We felt like we were rolling in the dough and had more than enough. Living on one income seemed to be a breeze!

Fast forward 15 years and I’m still a stay at home mom. Steve taught for 12 years before he became an administrator, four years ago. I’m amused that, even though we are now in the six figure mark, the money struggles are real. How in the world did we ever do it on a teacher’s salary?

How We Thrived On A Teacher’s Salary

That’s the kicker, right there. Steve purchased a new truck when he started working. It was the big well-deserved splurge. We had a huge down payment and paid it off within a year. My car was paid for. Car payments make a huge dent in your income.

Our vacations were few and far between. We took a road trip out to see Steve’s family but, other than that, we just didn’t go anywhere. In 2012, we took an awesome 21 day road trip, in celebration of Steve’s new job. Since then, we have had lots of daycations.

It’s just something we didn’t do often because it didn’t fit in the budget and I’m a vegetarian so eating out wasn’t too exciting anyway.

Lived Within Our Means

We didn’t spend more than we earned. Period.

Need something to do? Volunteer! I have always volunteered at church and the kids’ schools. I’m slowing down, in this department, but it was a lot of fun and kept my mind working.

We did everything we could, ourselves. No hiring out the yard work or moss removal or cleaning the house. After Steve’s big job change, we hired a lawn service but have since decided to mow our own lawn. After having our front hill landscaped, it is now much easier to mow.

Babysitters get paid a lot! Grandma and Grandpa made excellent sitters, when needed.

We’ve never been big on thrift store shopping or purchasing used items but we were incredibly blessed with hand me downs from my sister’s kids. We rarely had to buy clothing for our kids which was a huge savings.

Sold Stuff We No Longer Used

Those GeoTrax, sitting in your son’s closet, might be worth a lot on eBay! We cleaned out our rooms twice a year and sold the items we no longer wanted on eBay, Craigslist, or at a yearly garage sale.

We lived in a 900 square foot duplex that I had purchased at the age of 21. The rent from the other side, of the duplex, covered most of the mortgage. Sure, the kids shared a room and our friends lived in nicer houses but it was perfect for us! When we were ready to move, we had a ton of equity built up in the duplex.

Living on one income was tough. I’m not gonna lie. Being a single income family takes hard work and sacrifice but it is so worth it! The cost of daycare would have significantly eaten into any paycheck I would have brought home and guess what? We survived! Living on a single income was possible with two kids, a dog, and a teacher’s salary! 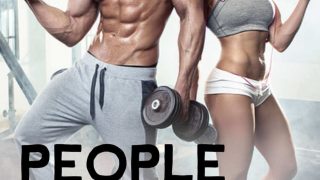 ← Previous
People You Meet at the Gym 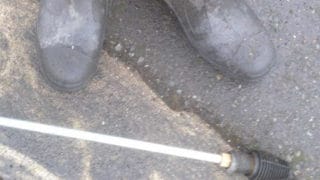 You've pretty much said it all! We're a cat, dog, teenager and a teacher's salary. Debt free except for a mortgage keeps us able to have breathing room, and it has taught us to constantly assess our values and not give into instant gratification. We continually remind ourselves that while we don't have or do nearly what our friends and family do/have - we are blessed beyond measure and compared to much of the world's population, we live a life of extreme wealth.

I love it Karen! We are truly blessed beyond measure.

We don't have children but some of my colleagues do and when I found out how much they pay for childcare, it amazes me that anyone can afford to go back to work after children!

I hear ya! I guess it pays off in the long run or if you have family willing to help out. It just wasn't worth it for us.

Yes, I do recognize that street--San Francisco, world's curviest street! :) Great tips, Jayleen, many of which we follow as well. To further save, we've pretty much given up on Amazon.com. It's too addictive and the purchases really add up. We're not impulse buyers anymore. The key for us is to just look around and be thankful for what we have instead of always wanting "more, more, more!"

You're right Joy! Have you been there?! Such a cool street!

Aha! Amazon! I've ordered a few things from them but I can see how addicting it could get, especially if you joined for free shipping. You sound very content!

Great tips here, Jayleen, and we did/do most all of these. I would gladly do them all again to be able to be at home with the kids - SO worth the "sacrifices". :-)

I completely agree Laurie! I wouldn't change a thing!

I worked outside of the home when our kids were little. I'm pretty sure daycare took half of my paycheck for a few years! Now I work at home and my youngest goes to daycare while my oldest is in school. I make a lot more now so daycare doesn't hurt quite as bad!

It's amazing how much daycare costs. It sounds like you have a great situation now! I still drive the family 'school bus' but the kids are getting easier and easier. Almost so easy that I might need to get a real job;0) Lol!