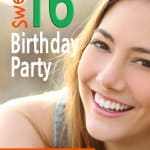 By now you’ve probably had just about every kind of Birthday Party imaginable. This time, your Sweet 16 son or daughter just wants time to hang out with their friends and have a good time!

No agenda, just food and opportunities for fun!

Up until now, every Birthday Party Justine had was a well orchestrated event. Games and activities were scheduled, right down to the minute. I’m kind of organized in that way.

This year would be different.

This year we would simply provide food and games and activities for the teenagers to do, in their own time, their own way.

This post contains affiliate links. If you purchase through an affiliate link, we receive a small commission and the price remains the same for you. See our disclosure for more info.

Tacos were the food of choice for our Birthday girl and Frozen Cookie Dough Balls with ice cream sundaes were a hit!

We gathered the supplies for the following games and left them out for the teens to use as they saw fit.

Okay, don’t be appalled! My daughter had a GlowPong set she got from her crazy uncle one Christmas.

We set up our ping pong table in the garage and left the opportunity of GlowPong.

Before we knew it, the strobe light was on, music was blaring, and GlowPong was played!

If laughter is any measurement, GlowPong was a hugely loud success!

The Celebrity Name Game is always good for fun and laughter!

Each friend took a Who Am I card and wrote a memory of the Birthday Girl! We gathered the cards and I read each one to the group.

If the Birthday Girl couldn’t guess who wrote the memory, they got a prize.

If she knew who it was, no prize for them!

Here are a few examples:

This game was hugely successful and the teenagers wanted to keep it going!

We hooked the iPad up to a speaker and played different songs from YouTube. Songs from the ’80’s, ’90’s, and current songs.

Whoever guessed the name of the band first, won a $1 bill!

There was dancing, singing, laughter and lots of guessing!

We originally planned on just 10 songs but ended up doing at least 20.

Name that Band was probably the highlight of the party!

We found Would You Rather? questions, cut them, and the Birthday Girl chose which ones to use at her party.

We put the slips in a jar and printed the provided label to attach with jute.

The teenagers had a lot of fun with this and had lots to say!

We went to Target and the Birthday Girl chose about 10 prizes to add to miscellaneous prizes we already had at home.

They were mostly silly prizes like a hot pink garden gnome and a pet rock craft kit.

For Name That Band, we had dollar bills ready OR they could pick a prize from the prize basket.

Let me tell you, we could have just done all dollar bills. The teenagers wanted the money, hands down! Two dollar bills would have put it Over The Top!

How the Sweet 16 Birthday Party Really Went Down

The teenagers had a lot of fun hanging out outside for most of the evening! They rode bikes and wiggle cars, played catch with the football, tossed around the giant beach ball, and they even found the chalk and wrote all over the street!

The music was playing and fun was everywhere!

They took a break for dinner and went right back to hanging out and having fun!

When the sun went down, GlowPong was the game of choice!

Eventually, they all came inside ready for more.

Justine opened gifts and we played the other games listed above, finishing off with Name That Band.

Everyone seemed to have a great time. So great, in fact, that the party turned into a giant sleepover!

You are ONE FUN MOM BRIDGET! I love your ideas so much. You are still the Queen of Fun in my book! :D

Yay! I'm glad you think so, Kay! I'll take that title any day!