3 Reasons You Should Turn In Found Money 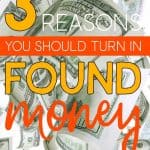 Yay for Birthday emails from all my favorite stores! The kids and I were on a mission to use every last one. We walked into a shoe store to use a $10 Birthday certificate and headed straight to the socks and wallets. As we looked at the choices, my daughter gasped and held up a wallet she was looking at. Inside was a crisp, one hundred dollar bill. So crisp, that I questioned it’s authenticity.

Have you ever found money?

Does your inner child come out and recite that common phrase, Finders Keepers, Losers Weepers? (Okay, I admit to using that line when I find money in the laundry!)

Visions of dollar signs and all the possibilities you could use that money for are quickly overshadowed by your conscious.

You know, clear as day, you need to turn that money in.

But WHY Should I Turn In Found Money?

A few years ago, my daughter had saved enough to take one hundred dollars to the mall. She handed her hundred over to her dad for safe keeping. Steve put the money in his front pocket and I’m sure you can guess the rest of the story. Somewhere between Justice and Auntie Anne’s, the hundred was lost. We retraced our steps and talked to cashiers and mall information to no avail. The money was gone. It was heartbreaking.

Put yourself in the loser’s shoes. Don’t make them weep!

God isn’t throwing money at you!

If a phone was left on the counter, you would turn it in, right?

2) To clear your conscious.

You may be thinking, if I turn this money in, the cashier is just going to pocket it. Yep! I’ve had that same thought. The thing is, what if they don’t? What if someone is grateful you were honest?

I read a story about a woman who went to her bank’s ATM and saw there was money left in the machine. It was five hundred dollars! She wheeled around and went into the bank to turn the money in. It was discovered that the money belonged to a 92-year-old woman who had tried to draw money out to pay her rent of $480. She was so grateful the money had been turned in that she offered the extra $20 to the honest woman. Come to find out, that was all the money she had for the month. The gal who had turned it in, along with friends and the bank tellers, pooled money to help this lady out.

I don’t know about you but I’d rather have a clear conscious, knowing I did the right thing!

3) For a return on investment.

We reluctantly agreed to take the two teens to a late night laser game with their youth group. Reluctantly, only because we’re old fogies who rarely stay up past 10:00, let alone out on the town. After dropping them off, we headed over to Target to waste some time. We picked up the lightbulbs we needed and, while checking out, the hubby found a twenty by the checkout stand. We asked the lady in front of us if it was hers. She shook her head. Ms. Cashier thought it was another employee’s who had just been through the line. We took the money to customer service and turned it in. It was a dark, rainy night as we hurried to our car. Guess what? There was a twenty on the ground outside the car. It was like money was being thrown at our feet.

Not long ago, we pulled into the driveway after grocery shopping and I realized I had left my iPad in the cart at the store. I know, I know, why in the world did I have my iPad in the grocery store? That’s a tale for another day. I was prepared to be the weeper when I went to customer service but, amazingly enough, my iPad was there! Someone had actually turned it in! They decided not to be a keeper!

Let’s break that cycle of finders keepers, losers weepers and someone just might do the same for you!

After discovering the hundred dollar bill in the shoe store was, in fact, real, we had a choice to make. Was it a great find for my daughter? Should we purchase the wallet with the hundred in it? OR, should we turn the money in?

We chose to take the wallet with the hundred dollar bill to the counter. The young cashier told us a lady had just returned the wallet. I have no idea what happened from there. I admit, I thought it; we just made that cashier’s day. She’s going home one hundred dollars richer.

Ah, but we are going home with a clear conscious, knowing we did the right thing! There wasn’t a keeper or a weeper to be found! 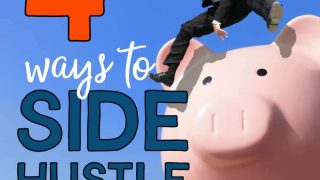 ← Previous
4 Ways To Side Hustle Without Selling Your Soul 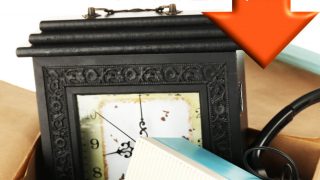 Next →
How To Set Garage Sale Prices
Click here to cancel reply.