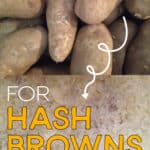 If you’ve come across a bunch of potatoes, or grown them in your garden, you may want to learn how to freeze potatoes for hash browns! That way, you can enjoy homemade hash browns beyond the growing season.

Just about three weeks ago, we purchased two boxes of potatoes for a steal of a deal. We thought we could keep them cool enough to last until every last one was consumed. Unfortunately, it didn’t happen. The potatoes started shriveling and we had to act fast!

I started making potatoes every way I knew how. I even made the kids homemade french fries and they loved them. Better than McDonald’s any day!

Let me ask you though … have you ever had homemade hash browns?

Oh my goodness. You will never want store bought hash browns again. Hands down. They have become a Sunday morning tradition around our house!

How To Freeze Potatoes For Homemade Hash Browns

This post contains affiliate links. When you purchase through an affiliate link, we receive a small commission at no additional cost to you. Disclosure.

2) Peel your potatoes and place them in a bowl of water until you are ready to use them.

3) Quarter your potatoes and put them in your Vitamix, filling to the 4 cup mark.

5) Set to your Vitamix to variable 5 and turn on for 10 seconds, using the tamper.

If you don’t have a Vitamix, simply shred your potatoes, using a cheese grater. It’s hard work but it works well.

6) Drain the water from your potatoes, using a colander.

But wait! You’re not done yet. Unless, of course, you are ready to eat them now. If so, go ahead and cook your hash browns.

7) If not, blanch your hash browns for three minutes, in a pot of boiling water.

Blanching is done by briefly cooking the food in boiling water and then immersing into ice cold water to stop the cooking process. Blanching brings out the color in vegetables and helps to maintain their nutritional value by decreasing the enzyme activity that reduces the flavor and texture of food.

8) Drain your hash browns and immediately put them in ice cold water for 10 minutes.

9) Drain your hash browns well and press any excess liquid out.

11) Then, spoon your chunky hash browns into freezer bags and lay flat in your freezer for easy stacking!

Neither did my husband, so I tried freezing a batch without blanching. I simply rinsed, let dry, and put the potatoes in a freezer bag.

This is what the hash brown potatoes looked like two days later. GROSS! Anyone hungry for black hash browns?

Making homemade hash browns is a long, tedious process but it will save you time and money later and … the taste can’t be beat!